Luigi Sacconi was born on February 28, 1911 in S. Croce sull'Arno, between Florence and Pisa, Italy. 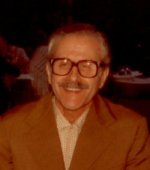 Until 1947, his life was quite adventurous. He was the son of a primary school teacher who never joined the fascist party and was persecuted by the political establishment. He was politically active before, during, and after the war.

In the 1950s, the progress in chemical sciences profited from the explosion of initiatives and results in the field of inorganic chemistry. The achievements are now a heritage of chemistry as a whole and constitute the chemistry of coordination compounds. He was a major character in the field.

Sacconi became full professor in 1954 in Palermo and in 1960 he joined the Faculty of Science in Florence. He retired from active teaching in 1981, and became Emeritus in 1986.

Just after the war, there were limited resources in the chemistry department with which to do research. As it turned out, he did not require much. He started working on the absorption of compounds on alumina. His first paper in English, on the mechanism of inorganic chromatographic absorption on activated alumina, dates to 1949 and was published in the Transactions of the Faraday Society.

He then discovered in the cellar a balance for magnetic measurements. It consisted of a current rectifier to generate a magnetic field and a balance. He adapted it for magnetic measurements using the Gouy method. In 1949, he published a paper in Italian on the magnetic properties of uranium(IV) complexes with coordination number eight. In 1950, he published a paper in the Journal of Chemical Physics on hydrated molybdenum blue and in 1954 one in the Journal of the American Chemical Society on acidic solutions of molybdenum(V). He suggested the dimeric nature of the latter and a direct Mo-Mo bond on the basis of magnetic susceptibility measurements. From this point on, he was fixture on the international scene.

Sacconi soon developed his interests in absorption spectroscopy, calorimetry and vibrational spectroscopy. He approached X-ray in 1962. In 1963, both the characterization and the X-ray structure of the "first tetrahedral nickel complex with bidentate ligands" appeared in the literature. In 1965, he published the characterization of the "first high-spin five-coordinate nickel(II) complex". The research on this new branch of five-coordinate coordination compounds was pursued till 1975, providing a large variety of five-coordinate compounds with many donor atoms and unusual magnetic properties. This gave great international prominence to the School of Florence.

In the final years of his research activity, he was attracted by low oxidation states of nickel and cobalt and he prepared and characterized many peculiar compounds.

His numerous publications, his intellectual curiosity, and his gift for personal interactions allowed him to be an international leader for over 40 years. He is the founder of a School where many foreign scientists have been educated. His international relations were many, and many indeed were his personal friends.